These works were commissioned by DP World London Gateway to create a new intertidal mudflat habitat as part of the environmental compensation for the construction of London Gateway Port. Before the breach, the main contractor, McLaughlin and Harvey, constructed a new 2km long flood protection bund behind the existing defences,

Once the new bund was completed, Ovenden Allworks began the 700m breach in the River Thames flood defences. We began by removing the original precast concrete wavewall units and driving the sheet pile cut-off wall below the breach level. The pre-cast concrete wall units were crushed on site to a Type 1 specification to use in the construction of maintenance access roads.

The 50,000 m3 clay bund at the core of the flood defence was then excavated and taken to borrow pits approximately 1km away. The bund had to be lowered sequentially in the days leading up to a favourable neap tide, as high tide levels reduced.  This cumulated in the removal of the central core in one tidal cycle, with 4 excavators working in tandem from the middle of the breach towards the ends. Once work had started there was no going back.

At each end of the breach, a roundhead was constructed using imported rock armour stone. 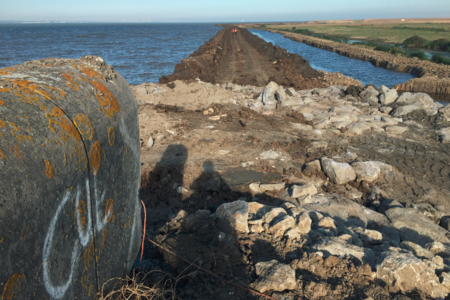 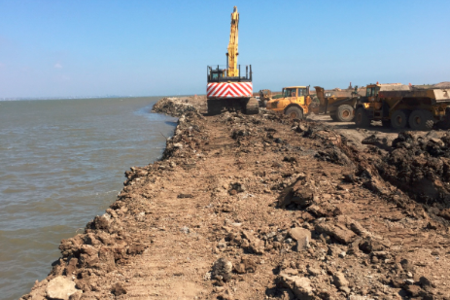