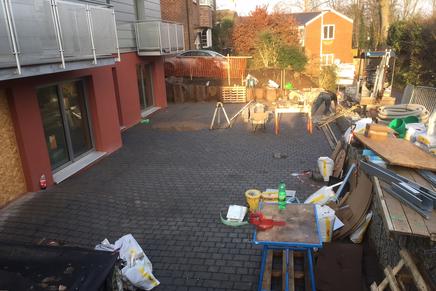 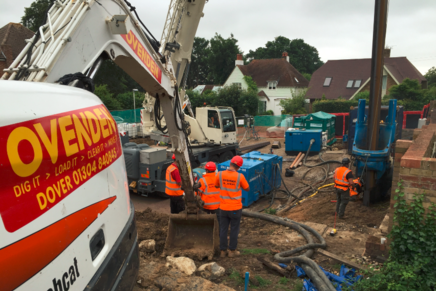 Ovenden Allworks were awarded the basement excavation and groundworks for the construction of two houses certified as achieving Passivhaus standards, which is an exacting, voluntary standard for energy efficiency in a building, reducing its ecological footprint.

The works consisted of first sub-contracting the demolition of the existing property, this was completed efficiently by Ling Demolition.

The next stage of the works was excavating down 3 metres to formation level for a basement to be constructed. Considering the confined nature of the site with close neighbours either side a methodology had to be devised to satisfy the party wall surveyor.

The chosen excavation support method was to use a silent piling method, where Ovenden Allworks manged the subcontract and was completed by Berryrange piling, which suited the site requirements by being a non-vibrating installation process to drive the 6.5m piles, which gained the surveyors approval. Another benefit was the piling equipment being relatively compact, which was crucial in saving space on the site.

This allowed us to continue the excavation down to formation also exposing the live sewer main running beneath the site that we were required to replace to Southern Water specification. This was done by creating a temporary manhole on site and over-pumping another manhole whilst it was replaced.

Once the excavation was down to formation, a type 1 sub base topped with a sand blinding was required to a 10mm +/- tolerance, to place the basement slab on top.