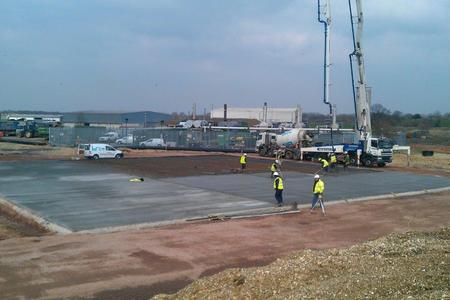 Ovendens were chosen for the construction of a Waste Validation Pad (WVP) to replace a similar existing facility.

The WVP comprises a 1200m2 reinforced concrete slab of high strength and abrasion resistance. A pushwall of precast concrete L shaped units were secured to the slab and backed with a removable bund to allow maintenance.

The pad was surrounded by and serviced by a bituminous surfaced road. The total surfaced area was approximately 3,600m2. The pad was underlain by a barrier of geocomposite and contaminated runoff will be collected via drainage kerbs and a pumping sump to pump leachate to an existing holding tank.

The contract was let in accordance with the terms and conditions of the Institution of Civil Engineers New Engineering Contract (NEC) Third Edition. Option B; Priced Contract with Bill of Quantities.